The 2007 Men's Basketball Team, only two days after beating the Rutgers Scarlet Knights, posted it's biggest margin of victory in the Doc Sadler era tonight, rolling past the Savannah State Tigers 83-37. With the win, the Huskers keep their undefeated streak at the Devaney Center alive, and improve to 7-2 on the season. 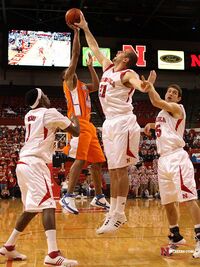 As has been the case the entire season, the men relied on strong defensive play to secure the win with ease. The Huskers held Savannah State scoreless for the first 6:07, while opening up a commanding lead, leading at the end of the first half 42-12. The Tigers were held to a measly 26.4% shooting percentage from the floor on the night, scoring only 12 first half points, which ties a Devaney Center record for least points scored by a visiting team at halftime.

The Huskers were led in scoring by the China native Shang Ping, who posted 11 points on 4-6 (66.6%) shooting. Senior Aleks Maric also broke double-digit scoring, posting 10 points to go along with 6 rebounds and 4 blocks.

The 37 points scored by Savannah State marks the lowest opponent total since Doc Sadler became head coach, and marks the first time a Nebraska team has held their opponent under 40 points since 2004. Nebraska forced 21 turnovers in the game, matching their season-high.

Retrieved from "https://husker.fandom.com/wiki/Men%27s_Basketball_Team_Dominates_Savannah_State?oldid=3121"
Community content is available under CC-BY-SA unless otherwise noted.