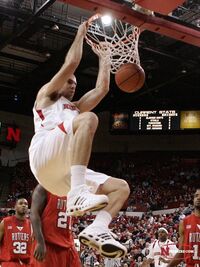 Led by three players in double figures, the Nebraska men's basketball team used a 24-4 run before and after the halftime break to cruise past visiting Rutgers, 63-51, Sunday afternoon at the Bob Devaney Sports Center.

Aleks Maric led the Huskers with 19 points and eight rebounds, while Ryan Anderson tied his season high with 14 and Ade Dagunduro poured in 13. Behind those three, Nebraska won at home by at least 14 points for the sixth time in six home contests this season. The win also kept NU perfect at home this season, while improving the Huskers' overall record to 6-2.

After Rutgers shot the ball well early, the Nebraska defense harassed the Scarlet Knights for the rest of the game. NU limited Rutgers to 35.1 percent from the field, including just 24.1 percent in the first half.

Fueled by the stingy defense, the Huskers closed the first half on a 15-2 run and opened the second half on a 9-2 spurt. Before the first run, Nebraska trailed by two and by the end of the second run, the Huskers enjoyed a 17-point lead they would not relinquish.

NU continued to pour it on to start the second half, using a 9-2 run over the first six minutes to build a 17-point advantage.

Retrieved from "https://husker.fandom.com/wiki/Men%27s_Basketball_Team_Runs_By_Rutgers?oldid=3122"
Community content is available under CC-BY-SA unless otherwise noted.