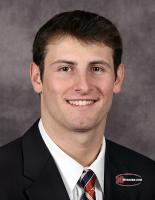 Patrick Witt, a redshirt freshman for the '07 football team, was arrested Sunday at Smith Hall on campus. Witt, 18, was lodged in jail in Lincoln on counts of disturbing the peace, trespassing, third-degree assault, minor in possession and possession of a fake ID.

Allegedly, Witt tried to enter Smith hall around 1:50am, and failed to follow instructions. Police captain Carl Oestmann states that he apparently signed in with a false name and went up to a floor without waiting for an escort, as per dorm rules.

A resident assistant in the hall told police that Witt had threatened him with remarks, while repeatedly pushing him. He then took off running, exiting the dorm and being caught around 16th and W streets.

Allegedly, Witt had possession of an ID that did not belong to him, and his blood alcohol content was 0.115.

Head Coach Bo Pelini had this to say:

"I have talked with Patrick about the incident over the weekend and we are looking into the facts. This matter will be dealt with internally."

This is the fifth time a Nebraska player has gotten in trouble with the law in 2007, and also marks the fourth time that alcohol has been a factor. Witt redshirted during the 2007 season, and posts a 4.0 grade-point average.

Retrieved from "https://husker.fandom.com/wiki/Witt_Arrested_at_UNL_Dorm?oldid=3056"
Community content is available under CC-BY-SA unless otherwise noted.